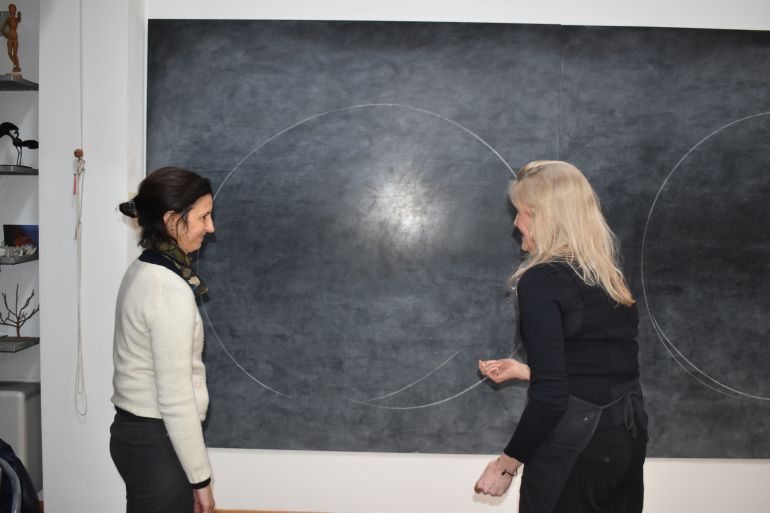 In 2018 Anna Caione was awarded a Fellowship from the International Specialised Skills Institute, Australia to travel and undertake studies in art in Milan, Italy. Caione had the opportunity to study the Martenot Method, a unique philosophy of art centered on reawakening creativity. Caoine was taught by Daniela Radeglia, a former student of Ginette Martenot (1902-1996), the founder of the Martenot Method.

Caione’s current exhibition Gesto - Gesture, includes new works derived from this philosophy. The artworks centre on bodily proportion and movement and incorporate gesture and ‘stretching’ as an articulation of the human form. The layering of materials further evokes the body’s natural alignments and proportions. This works reflects Caione’s recent studies in Milan and her focus on the capacity of line, mark-making and gesture to connect mind and body through movement.

Caione drew inspiration from Martenot’s philosophy on how bodies are proportionally and mathematically aligned. Martenot demonstrated that natural and gestural movements can be harnessed to produce perfect symmetrical forms based on the body’s own geometry. While Martentot’s system was a product of a 20th Century enquiry, it drew also on the insights of Italian Renaissance artists. Leonardo Da Vinci, Sandro Bottecelli, Giotto and Paolo Uccelli all used bodily proportion as a guiding principle of pictorial harmony. Key to the Martenot method is the practice of gesture and body movement, with students being encouraged to use chalk and full-sized blackboards so that fully extended arm-strokes can translate into bold and linear geometries. 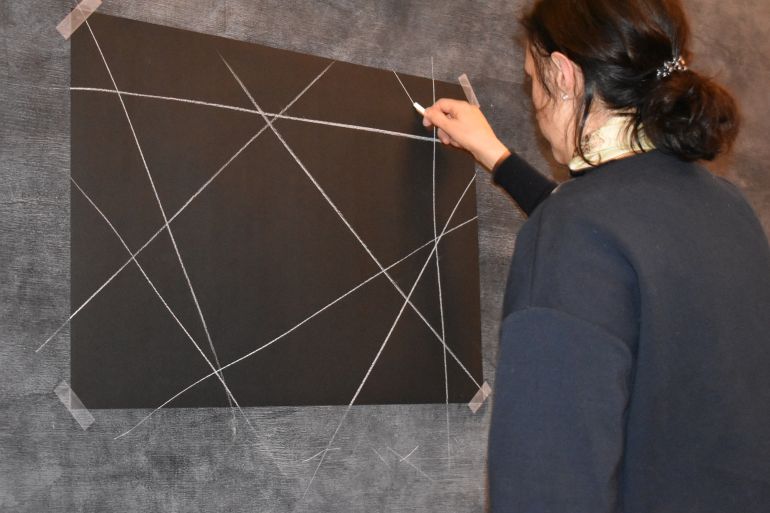 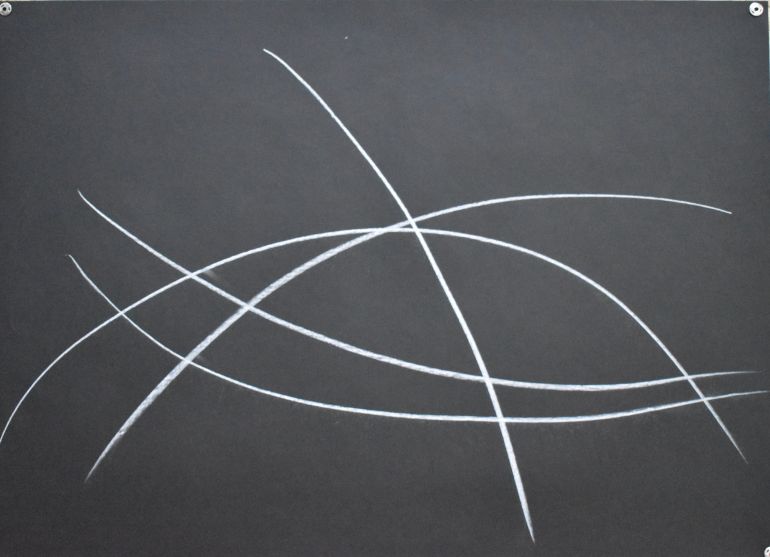 CAPTION: Anna Caione practising natural line compositions on the blackboard using her entire body weight and arm motion. The technique enables the practitioner to achieve perfect straight and curved lines, through which, one learns to understand and embody compositional structures.

My work fuses aspects of contemporary culture and my Italian heritage, which may be understood as a threshold between the realm of intangible memory and the physical realm of place. I endeavour to manifest such universal links exposed within my artwork.

I am concerned with subjective understandings of matter and space; the energies inherent in materials; with vitality and memory. I sporadically reference old historical surfaces, architecture and the landscape. I attempt to resonate these qualities through revitalizing collected remnant fabrics and found objects in which intuition, combined with bodily gestural movements help to construct my compositions, described as impulsive, rather like an ‘automatic’ mind connected with hand and fabric, a form of automatism. ‘Automatism’ is a concept based on the intuitive drive, the irrational, and the accidental occurrences during the process of creating. New York School abstractionist Robert Motherwell defines it as ‘letting the work pour out, without any critical intervention or editing.’ The process of creating for me involves stretching, sewing, pulling, layering, cutting, and pouring with the application of mixed mediums and materials. The textural manipulation and layering of the surface exposes the raw materials used to uncover the surface palimpsest and the artwork’s subconscious narrative through which the exposure of the artwork’s skeletal structures and layers are discovered. The artwork functions as a means of not only of the exploration through the process of creating, but also allows for the viewer to conceive an intangible atmosphere conceived within the work.

Following her studies in painting, anthropology and music Ginette Martenot became convinced that an immersion in such disciplines could not only cultivate human sensitivities but also bring about greater personal self-awareness. Her pedagogy arose from the idea that people who play, preform or create art should be free from mental and physical tension in order to fully express their energies and creative abilities. The Martenot Pedagogy developed in the late 1930s, and it was through Ginette Martenot’s special encounters with such figures as the Bengali poet and polymath Rabindranath Tagore (1861­–1941) and the French writer Luise Artuse (1870­–1960) that her ideas took shape. During extensive travels in India, Japan and China, Martenot came in contact with many accomplished individuals, including various Chinese master calligraphers. For Martenot these philosophies and master practitioners were highly influential and fundamental to her establishment of the Martenot Method and the teaching of painting and drawing. Later, in collaboration with painters, pedagogues and psychologists that she was able to articulate a link between the gestures of artistic expression and the development of the individual’s own sensitivity and state of mind.

Ginette Martenot instigated the concept of gesture and mark making as the platform for initiating creativity, which she perceived as a fundamental human need.

Particular attention was devoted to the development of the principles of art that inform this philosophy. Rather than being about conscious, rigid structure and technique taught and applied during the creative art process, Martenot sought to cultivate each person’s awareness and understanding of the inner self, intuition and surroundings. The process enables the practitioner to focus and to settle on what one wishes to express through the creative process. Martenot understood art to be the essence of humanity, that to be fully human is to be an expressive being, and to realise oneself one must be creatively engaged.

Damian Smith is a freelance curator, arts writer and academic working in Australia, Asia and Latin America. He is the Director of Words For Art and a member of the International Association of Art Critics.

Sailing into History: Displacements and Arrivals.
May