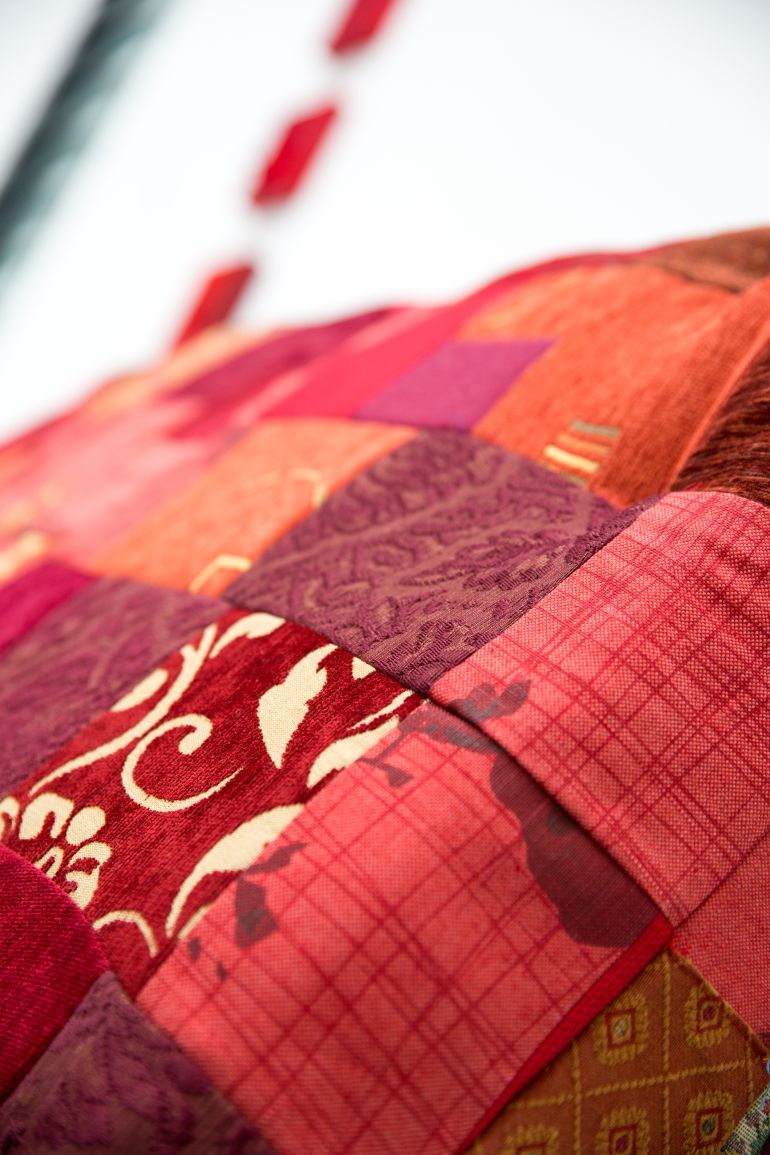 Sailing into History: Displacements and Arrivals.

Opened in 1854, Station Pier is the site of Melbourne’s first railway line and
the seed from which the city grew. During the Australian gold rush in the
second half of the nineteenth century, the pier was the link to the city for
traders and settlers. On these locomotives came the exotic and the familiar:
goods and people from faraway places looking to Melbourne for the promise
of a fresh start and glittering gold. In the 1950s, a flood of migrants made their
way via the pier to a new life. Adjacent to Station Pier, on the city side of Port
Melbourne, lies Princes Pier. Constructed between 1912 and 1915, it was originally known as New Railway Pier and was renamed Princes Pier in honor of
the royal visit by the Prince of Wales in 1920. Princes Pier was the site from
which many Australian troops set off for World War I and World War II; it was
also the arrival point for American troops during World War II. In peacetime,
it was the first landing point in Australia for postwar migrants—more than one
million between 1947 and 1969. The annual Piers Festival, launched in 2012,
celebrates the pivotal role the piers played from 1915 to 1969 in Victoria’s
economic growth and as a gateway to the diversity of the state.

Sailing into History: Displacements and Arrivals is the latest iteration in a
series of site-specific expositions produced by Multicultural Arts Victoria as
part of “What Happened at the Pier,” an intergenerational and multicultural
social history project conceptualized as a rich narrative experience showcasing
migrant stories across multiple artistic formats, including poetry readings,
visual art installations, and musical responses. It is intended as a cultural
production to enhance social connectedness and foster links among new and
established community members. While previous iterations included heritage
material, photographs, collages, found objects, and documentation from at
least nine different countries of origin, the choice of locating Sailing into History
at the Museo Italiano signals the desire to focus attention on Italian migration
to Australia. The Museo’s permanent multimedia exhibition tells the story of
Italians in Australia, with a specific focus on the suburb of Carlton, Melbourne’s
Little Italy.

Curated by Lella Cariddi (whose own migration story begins with her
family’s arrival at Princes Pier in 1955), the objects, artworks, and biographical
profiles in Sailing into History present the social history and cultural memories of migrants who came to Australia by ship. Reflecting on both piers as significant entry points for thousands of post–World War II refugees to Australia, the
exhibition functions as part contemporary art, part social history, part heritage,
part migration history, and part community art.

Interest in family history and cultural heritage in migrant communities has
specific motivations, and it is in this space that the aims of the Museo Italiano
and those of Sailing into History converge. Through a process of action research,
in which the informants were involved as participants, Cariddi has individually
curated brief yet significant personal histories told by first-generation migrants
or by their children, who are referred to in the exhibition as Memory Keepers. In
a collective effort that cuts across sociocultural divides, memories are brought
together and interpreted so that they may speak to the younger generations who
live in such a different world. The exhibition contained two examples of memoir
writing that associate the experience of migration with the (self-)definition
of difference in a context of cultural hybridism: Sabi Buehler documents the
story of her mother’s life in A Life in Two Suitcases through the letters, paintings,
diaries, and keepsakes her mother had saved since her childhood in Germany;
Marcello D’Amico recounts his journey in The Voyages of the Boy from Ginostra
through a collection of poems written in both Italian and English and accompanied by twenty-two drawings inspired by the Aeolian Islands, where he grew up.

Sailing into History was limited in scope by the small size of the community
gallery space and was quite conventional in terms of type and format, with
objects displayed in two vertical cases (ideal for showing the 1950s dress) and
in a couple of ceiling installations, accompanied by freestanding text panels.
Most of the exhibition consisted of a series of framed two-dimensional panels
containing family histories. Some of the panel text was too dense and the quality
of the textual layout (and editing) rather uneven, making it difficult to read the
captions. Overall, it left me with a sense of wanting more. I would have liked
to have seen more focus on how the found objects and/or cultural products
became a working symbol of cultural maintenance in a new land.

The idea of displacement, referred to in the title of the exhibition, relates to
the material as well as the psychological experiences of migration, adjustment,
and assimilation. For me, the most emblematic pieces in this context are those
by three women artists: Anna Caione, Luci Callipari-Marcuzzo, and Elizabeth
Presa. Each in her own way translates personal experiences into a visual and
tactile record that is both a subjective reconstruction of cultural roots and an
acknowledgment of those aspects that are common to the migrant experience. Anna Caione, a Melbourne-born artist of Italian descent, is primarily
a collage artist who creates layered works with a range of colors, fabrics,
papers, media, and markings based on a poetics of remembrance, history, and
nostalgia. Her installation for this exhibition, titled Riparare-sistemare-aggiustare (to cut-to sort-to mend), brings together the notion of both the intangible realms of memory and the physical realms of place. In her words, she seeks “to create a palimpsest of history executed through colour, texture, and surface.” Significant suturing and shearing gestures are integral to the work, which demonstrates a symbolic coherence created by the pattern of plural connections, surfaces, and directions, while emphasizing the ambiguity and uncertainty of living between cultures.

A merit of this exhibition is that it provided a space in which to engage in the production, as well as in the enjoyment, of culture during a collaborative live-art performance installation titled Tracing Threads of the Past [Tracciando Fili del Passato]: embroidery [ricamo] conducted over three days by Luci Callipari-Marcuzzo. Wearing her grandmother’s dress, which had been on display throughout the exhibition, Callipari-Marcuzzo attempts “to re-imagine traditional methods of women’s work ‘making,’ by re-interpreting and translating the experiences of Calabrian settlers to North-West Victoria [where she lives] in a contemporary visual art and sociological context” by creating a series of embroideries on-site. Members of the public were invited to bring in a piece from their own (or a family member’s) glory box and share its story, to join in the embroidery circle and create their own piece of embroidery, or simply to visit at any time over the duration of the live performance.

As a microhistorical document Sailing into History testifies to a turning point in Australian history, one that gave this country variety, a more colorful lifestyle, and both extraordinary manual and intellectual inputs from different Italian regional
backgrounds. A highlight of the exhibition in this regard is Elizabeth Presa’s sculpture installation in plaster and lace that documents the residues and textures of objects, experiences, and places, revealing how the artist “uses the forensics of plaster to explore traces of the psyche.” Her work exemplifies the ways that
recording and sharing historical and personal narratives can act as a reconstructing device, providing a starting point to self-awareness and connectedness. Through their creative practice Caione, Callipari-Marcuzzo, and Presa draw together historical threads and weave a pattern through time and space that provides significant insights into the broader narratives of migration. In keeping with the main aim of the exhibition, they respond to a need to reconnect—to address, through empathetic responses and new understandings, the cultural and existential breaks caused by the event of migration and by the ensuing experiences in the new country. 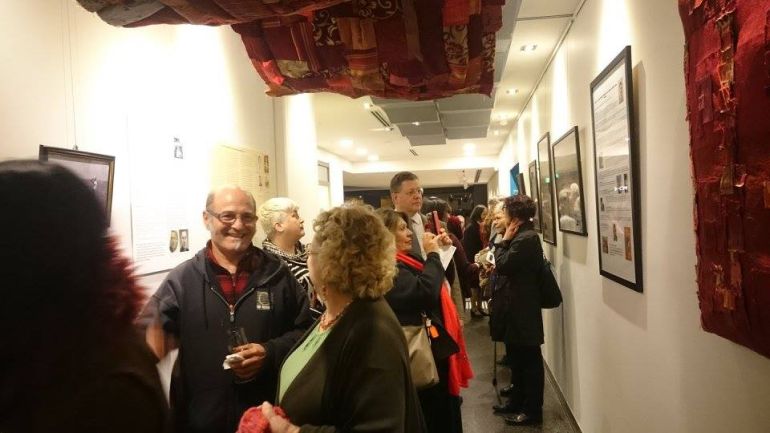 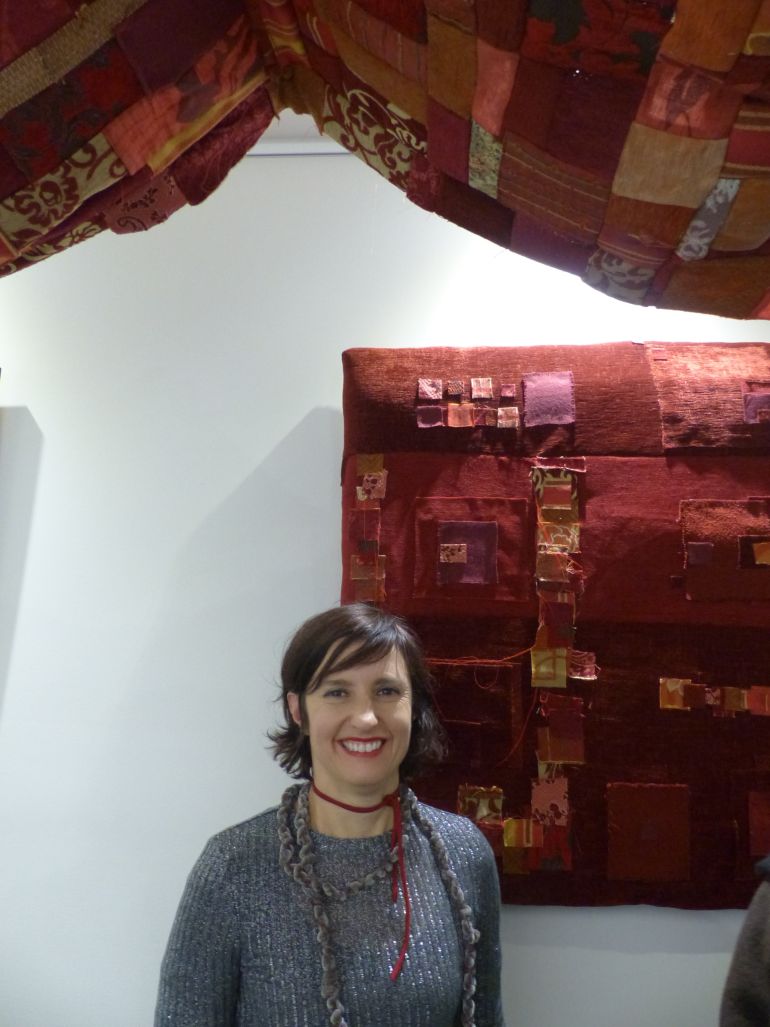 Sailing into History: Displacements and Arrivals.
May